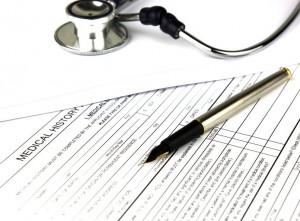 Normal functioning adrenal glands produce more than 50 hormones but cortisol is the most important hormone to look at when testing for Adrenal Fatigue.

Testing cortisol levels can be done through a variety of tests all depending on your doctor’s order and ofcourse your own wishes. To get the most accurate diagnosis you may use several tests in conjunction with self-assessments and other complementary health tests.

Lab tests that most conventional doctors use only measure extreme adrenal dysfunction (Cushing’s Syndrome and Addison’s Disease). Those tests also don’t take into account the natural changes of adrenal function throughout the day (diurnal rhythm). The best way to determine adrenal function is to test cortisol at a variety of points through the day to see if cortisol is spiking and dropping at the correct times.

Depending on the stage of the disease, hormone levels can vary significantly. In addition, current lab tests, aimed at the detection of the Adrenal Fatigue, should be analyzed very carefully. To diagnose Adrenal Fatigue, one should have a clear understanding of the way a person reacts to the hormonal changes and fluctuations. This is the only way to properly diagnose the exact stage of Adrenal Fatigue and come up with an appropriate treatment solution.

One can point out four stages of Adrenal Fatigue. Each of these stages has a certain development pattern, which makes it possible to diagnose the symptoms and get a better understanding of this complicated process.

The first stage is an individual response to stress. Stressors can vary per person depending on the circumstances, as well as on a person’s individual traits. For some people, an exam, a job interview, or the fact of going to the hospital is already stressing enough. Others are less prone to stress, so for them, for something to be a stressor it has to be more drastic than that.

To cope with stress, bodies generate a number of hormones. At this stage, lab testing can show elevated levels of DHEA, cortisol, insulin, norepinephrine, and adrenaline.

During this stage, people feel alarmed, may have trouble sleeping, or experience fatigue. Few people report symptoms like that – in fact, few people believe them to be important. As a rule, people go through this stage more than once in a lifetime.

As the alarm increases, a person starts to generate even more stress coping hormones, like cortisol. This results in the decreased level of other, seemingly less important in the circumstances, hormones. DHEA and sex level hormones are the first ones to drop.

The second stage is characterized by increased alarm and arousal. The body generates a lot of adrenaline, which makes a person feel alert throughout the day and exhausted by the evening. It is important to note that a lot of people going through the second stage of Adrenal Fatigue become caffeine-addicts. All in all, the common feeling during this stage can be described as “anxious and exhausted”.

At this point of Adrenal Fatigue development, the process of producing stress hormones instead of sex hormones becomes even more conspicuous. In other words, testosterone and DHEA drop substantially, while cortisol levels will be far more elevated than usual. One can say that your body ‘steals’ from sex hormones, such as pregnenelone, and uses all of the ‘borrowed’ power to generate cortisol.

Even though a person can still have a normal life at this stage of Adrenal Fatigue development, the quality of life drops enormously. No doubt, it is possible to go on with a job and daily routine. Yet, the lack of certain important hormones results in slight depression, exhaustion, decreased interest in sex, vulnerable immune system, and general lack of any drive or enthusiasm. This stage can continue from several months to several years, and many people still fail to regard it as a symptom of Adrenal Fatigue.

At this point of Adrenal Fatigue, the body is simply incapable of producing more cortisol and stress coping levels. So, the level of these hormones begins to decrease. Yet, this does not mean that the sex hormones begin to elevate. Quite on the contrary, both stress and sex hormone levels are very low.

This process is also referred to as “burning out”. The term has been introduced by Dr. Fredenberger and is used to describe the consequences of prolonged stress coping.

The fourth and final stage of Adrenal Fatigue can result in depression, apathy, exhaustion, weight loss, increased irritability and lack of interest in the surrounding world / people. Recovery from this stage requires a lot of time. In fact, it may even require complete change of scenery and lifestyle.

Adrenal Fatigue is typically caused by a combination of stress and several unhealthy lifestyle factors each of which requires your adrenal glands to continuously release adrenaline and cortisol with little or no recovery period. As a result the adrenal glands become drained and depleted after which they are unable to function properly.

The good news is that through proper diet, lifestyle adjustments, supplementation and stress reduction, adrenal health can be restored. The duration of recovery will vary from person to person as each person’s symptoms, level of Adrenal Fatigue and situation will differ. Since the causes of Adrenal Fatigue are different for everyone, your personal approach to treating Adrenal Fatigue should take into account your own personal situation.

If you take your recovery seriously, you can expect your Adrenal Fatigue to heal in:

When designing a treatment plan there are 2 key steps to restoring adrenal health and healing from Adrenal Fatigue (both of these steps and more steps are explained in our workbook): 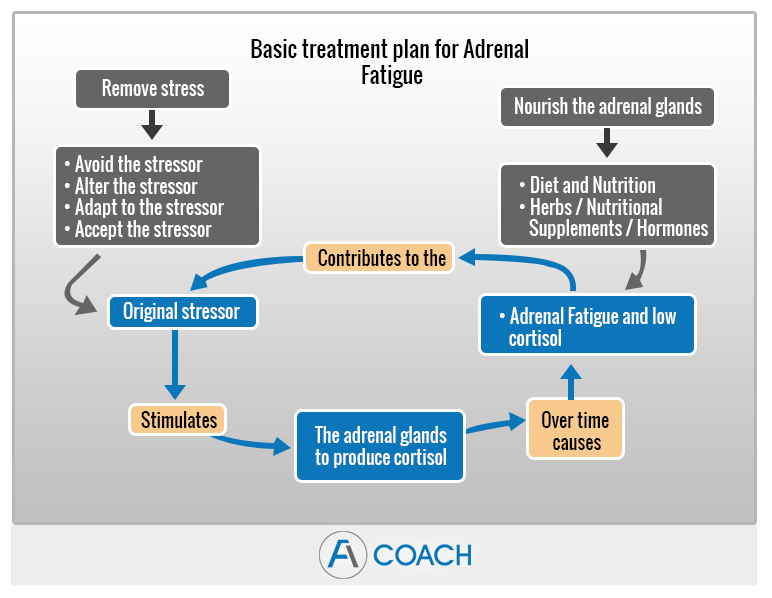